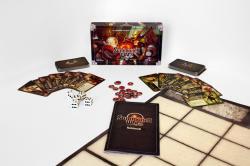 Blood will Flow in the Wasted Summerlands!

What was once a fertile land of unparalleled beauty was replaced by a wasteland of ice. Now the Phoenix Elves, trapped for millennia in their volcanic halls, have found a Summoning Stone and are ready to seek revenge for the destruction of the Summerlands. But in their way are the Tundra Orcs: frozen reavers with a Stone of their own, as well as plans for grisly conquest.

This Summoner Wars Starter Set provides 2 complete Faction decks, as well as all the materials needed to play games of Summoner Wars.