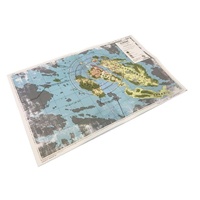 Tales from the Loop RPG - Our Friends the Machines This large, full-color, double-sided map details the Mlaren Islands, the main setting of the Tales from the Loop RPG, with a map of the alternative US setting based on Boulder City, Nevada, on the flip-side.