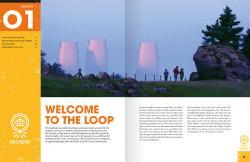 Sci-Fi artist Simon Stalenhag`s paintings of Swedish 1980`s suburbia, populated by fantastic machines and strange beasts, have won global acclaim. Stalenhag`s portrayal of a childhood against a backdrop of old Volvo cars and coveralls, combined with strange and mystical machines, creates a unique atmosphere that is both instantly recognizable and utterly alien. Now, step into the amazing world of the Loop in Tales of the Loop, roleplaying in the `80s that never was. In the vein of E.T. and Stranger Things, you’ll play teenagers solving mysteries connected to the Loop. The game rules are based on Mutant: Year Zero, which was awarded with a Silver ENnie for Best Rules at Gencon 2015. Key features:

“RPG Tales from the Loop lets you channel Stranger Things and ET.”

“Tales From The Loop could very well be the RPG phenomenon of 2017.”