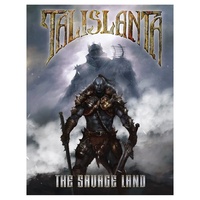 Discover the world of Talislanta in this campaign and setting book fully compatible with the 5th edition of the world's most famous roleplaying game.

Talislanta was first published in 1986. This newest edition provides fans new and old everything they need to set their campaign in the Savage Land.

This latest edition is set as a prequel to the original Talislanta setting. This period is a nightmarish version of our own Dark Ages where all knowledge of spell-casting has been lost; maps are nearly non-existent, and much of the world is unknown. There are no nations, city states, or even laws. In their place, tribes of warriors, nomads, slavers, and refugees struggle to survive in a hostile wasteland, torn by centuries of warfare and a malevolent magical maelstrom known as the Gyre.

This edition uses the rules from the 5th edition of the world's most popular roleplaying games. An edition exists which uses  the traditional ruleset in CHA7401