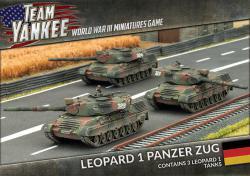 Though lightly armoured, the Leopard 1 tank is fast and well armed, with a 105mm L7 gun that is more than capable of dealing with any scouting vehicles of Warsaw Pact.