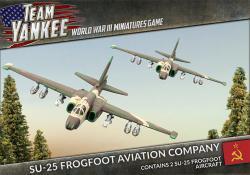 The Sukhoi Su-25 Frogfoot, known to its crew as the Grach ('Rook'), is the modern-day equivalent of the legendary WWII Il-2 Shturmovik. It’s tough and sturdy, able to sustain multiple hits and still bring its pilot home. Flying low and slow, it can safely attack enemy troops in close proximity to its own.

The SU-25 carries an impressive array of weaponry, including air-to-surface missiles and unguided rockets, on its ten under-wing hardpoints, as well as having a twin-barrelled GSh‑30-2 30mm cannon in the nose. It is the ideal aircraft to support the Soviet Army’s tank and motor rifle divisions.