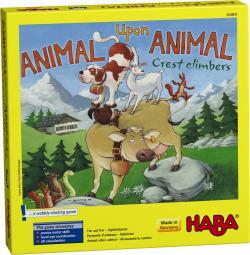 Listen up, Hearmees builders! We need to expand our city! The supervisor whips out his clawky-talky and claw-it…and off we go. Behind his screen, the boss claws pictures. All other players listen closely and guess what object is meant to be built. Was it a hammer or was it actually a broom? Whenever a Hearmeeshas heard the right object, he has the chance to add one new building to his neighborhood. Who has a great imagination and the best ears and will finish his neighborhood first?

Phase 2: Expanding Harquart City
Everyone wants to be the first to complete expanding his neighborhood. To do this, you need to win one house tile from each of the 5 distinct kinds of buildings. Each building type has a different color. Be alert! The house tiles also have various point values.