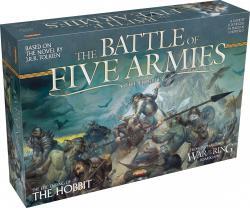 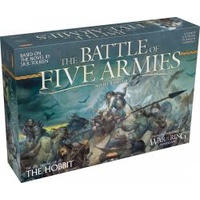 The Hobbit: the Battle of Five Armies 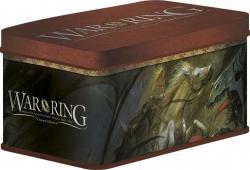 The Battle of Five Armies – based on the climax of JRR Tolkien's novel The Hobbit – pits the hosts of the Elvenking, the Dwarves of Dain Ironfoot, and the Men of the Lake led by Bard the Bowman against a horde of Wolves, Goblins and Bats led by Bolg, son of Azog. Will Gandalf turn the tide for the Free Peoples? Will the Eagles arrive, or Beorn come to the rescue? Or will Bilbo the Hobbit perish in a last stand on Ravenhill?

The Battle of Five Armies features a game board representing the Eastern and Southern spurs of the Lonely Mountain and the valley they encircle, and a number of plastic figures representing troops, heroes and monsters.

The Battle of Five Armies is a standalone game based on the rules for War of the Ring, which is from the same designers, but with the rules modified to function on a tactical level as they describe a smaller battle rather than the entire war. Ares Games plans to expand the Battles game system in the future, releasing expansions depicting other battles from the Third Age of Middle-earth narrated in The Lord of the Rings, such as the Siege of Gondor and the assault of Saruman against Rohan.

The Battle of Five Armies recreates the fierce struggle witnessed by Bilbo Baggins, at the end of his quest for the Lonely Mountain. The game makes use of the rule engine that debuted in the “Minas Tirith” and “Rohan” battle games, included in "Battles of the Third Age", the War of the Ring expansion we designed in 2006. Similarly to War of the Ring, the system merges our unique action dice system and card-driven mechanics, to ensure a high replay value. The mechanics have been further developed and refined for The Battle of Five Armies, to place a greater emphasis on the epic role of characters in the battle. This system is intended to be further developed in the future, to cover other battles from "The Lord of the Rings".

Despite its name, The Battle of Five Armies is a two-player game. One player is in command of the Shadow armies, led by Bolg, son of Azog, the King of the Goblins of Mount Gundabad, and a second player controls the Free Peoples army, composed of Elves, Dwarves and Men. The Shadow player will maneuver a host of Orcs, Great Orcs, Goblins and Wargs, reinforced by Great Bats from Mirkwood, in an attempt to vanquish the assembled forces of the Free Peoples and win the dominion of the North.

The Free Peoples player defends the valley between the arms of the Lonely Mountain, commanding Wood-elf archers and spearmen, Dwarf veterans from the Iron Hills, and warriors from the town of Esgaroth on the Long Lake. Bilbo Baggins, Bolg Son of Azog, Gandalf the Grey and all the other main heroes of the story are in the game, represented by plastic figures, their abilities summarized on beautifully illustrated character cards.

The main mechanic of the game is a new version of the action system first used in War of the Ring, which we re-designed around the specific needs of a tactical scenario. Similarly to War of the Ring, players roll a number of action dice each turn, and then alternate in taking actions, within the options allowed by the results of the dice. Possible actions include moving an army, attacking an enemy army, recruiting troops, rallying demoralized units, moving characters, and so on. Special cards can also be played as actions, to represent unusual events that let a player “break the rules.”

Since the number of dice and their results limit the available options, players will face difficult choices each turn. Like a real commander on the field, you cannot ever be completely sure that your troops will follow exactly your orders - you must have a flexible plan that you adapt to the result of your action dice roll. The War of the Ring combat system has been further enhanced by the addition of abilities specific to each type of troop, that can be activated during combat.

Another important new feature we introduced in the game, which is not present in War of the Ring, is the concept of Fate. Other powers beyond the strategic choices of generals affect the deeds of minions and heroes of Middle-earth. These forces can be held responsible for the occurrence of unexpected events, like the timely arrival of the Great Eagles, or the coming of Beorn, the skinchanger. In the game, the timing of these events is determined by the Fate Track, an erratic ‘clock’ whose pace may be influenced directly and indirectly by both players.

The Fate system has been designed to create a a tough (and interesting) choice for the Free Peoples player at the start of every game turn. When multiple Free Peoples generals use their special abilities, his army will be stronger – but Fate will be slower. A slow Fate is an advantage to the Shadow, as the strong allies of the Free Peoples will arrive later in the game.

The board for The Battle of Five Armies shows the southern and eastern arms of the Lonely Mountain and the valley of Dale. The Running River with its wide loop crosses most of the depicted area. This is where the players will test their mettle: the player to achieve victory will be the one who will make the best strategic choices amidst changing battle conditions. Will the captains of the Free Peoples succeed in luring the vanguard of the enemy into the middle of the valley to attack them from two sides as it happened in the book, or the Shadow player will bide his time and enter the ruins of Dale with a greater force?

To let different strategies be possible in a single-scenario game, we designed the board so that it offers multiple paths to victory. This seems to be simple to do, but in a game like The Battle of Five Armies, the flow of the battle must also reflect what the author of the story wrote about it! To help us in creating a board that was both accurate and playable, we could rely not just on the story, but also on Tolkien’s drawings.

A visual comparison between the game board and the author’s own art is a good example of the length we went to, to achieve the standard of truthfulness to the source material established by the War of the Ring game. Not to mention the sheer beauty of the work of Jon Hodgson, the board artist, who has worked many details into the Desolation of Smaug to make it a vivid and enjoyable backdrop to the many battles that will be fought upon it.

Last but not least, it’s worth mentioning that a lot of great new sculptures of the characters and armies from The Hobbit have been created for the game. We did not have them when we were designing and playtesting, unfortunately! Bilbo, Beorn, Bolg, Thranduil, Dain, Thorin, Eagles… All of them will come to the gaming table thanks to the great sculpts of Bob Naismith, the artist who created all the sculpts for “War of the Ring” - an industry veteran working for a number of years with Games Workshop/Citadels, and as a freelance sculptor for many other gaming companies.