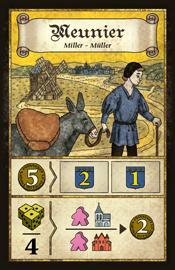 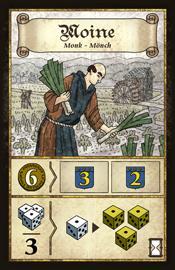 In the year 1200, the foundation is laid for the cathedral of Troyes, but it will not be fi nished until 400 years later, after innumerable incidents. This game invites you to experience four centuries of history by participating in the development of one of the fi nest medieval cities ever to make its mark on Western culture. The society of that day was organized into three orders: the nobility, the clergy, and the peasants. The nobility constituted the military force devoted to justice and to protecting the lands. The clergy were the spiritual guides of the community, contributing to maintaining and developing knowledge and culture. The peasants and artisans, in turn, were given very little consideration, although their hard work was essential to the daily life of the entire populace.

Troyes is a strategy game in which you represent a rich family from the Champagne region of France, using your influence to recruit and supervise individuals from the three prominent domains: military (associated with the color red in every aspect of the game), religious (white), and civil (yellow).

Each domain offers different benefits: The military permits you to fight with greater effi cacy against invasions. The clergy focuses on completion of the cathedral, and education of the peasants and the military. The peasants toil to fill your coffers. The citizens of the city provide a work force, represented by dice. You use the work force in different ways: to perform various activities supervised by your tradesmen, to build the cathedral, to
grapple with unfortunate events, or even to recruit new citizens. Each of these actions requires utilization of one group of 1 to 3 dice. In your actions, always regard the goals of the famous character that inspires your family. This individual is one of several very influential people whose principles have helped make the city what it is today! In fact, if you can figure out whose principles the other families follow, you can maximize your own fame, because each family will be scrutinized by all of these famous figures. The player who has garnered the most fame, in the form of victory points, will win the game!