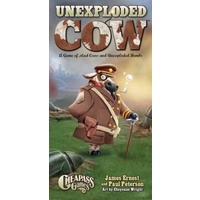 Europe. Summer. 1997. You and your friends have discovered two problems with a common solution: mad cows in England and unexploded bombs in France.

You've decided to bring these two powderkegs together just to see what happens. And you wouldn't say "no" to a little money on the side.

So round up your herd, march them through France, and set them loose behind the Cordon Rouge. If you're lucky you'll come home rich before Greenpeace figures out what you're up to.

Either way, there's something magical about blowing up cows.

Unexploded Cow is one of the most popular Cheapass Games ever, designed by James Ernest and Paul Peterson.

Unexploded Cow is a fast-paced card game. Players invest in mad cows, and then reap rewards as they rid the French countryside of leftover bombs. Note that the mad cow disease and unexploded bombs are historically accurate. Whether anyone actually did this is anyone's guess. We're guessing "yes."