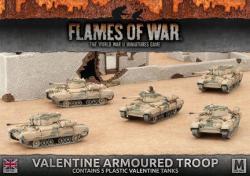 The Valentine was designed as a cheaper alternative to the old Matilda infantry tank. Weighing in at just 17 tonnes, it was faster and almost as heavily armoured, though it retained the same light 2 pdr gun. Its biggest improvement was its mechanical reliability. The Valentines of 23 Armoured Brigade crossed North Africa on their own tracks, fighting all the way.