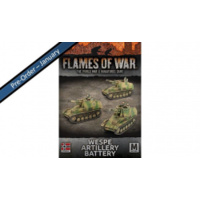 The Wespe (Wasp) self-propelled howitzer first saw action at Kursk in 1943. Based on the reliable Panzer II chassis, the vehicle proved well suited for supporting armoured units. Its weapon was the standard 10.5cm leFH18 howitzer, which provided excellent artillery firepower to the panzer divisions they supported.

The initial Wespe units had their first major engagement at Kursk and performed well in the initial phases suppressing the defending Russian troops as the Panzers rolled forward.