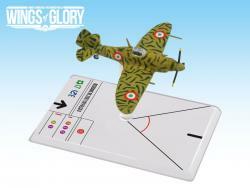 The Reggiane Re.2001 Falco II was an Italian fighter aircraft. With its flexible design, it proved to be able to undertake a number of roles, from convoy escort to night fighter. Thanks to its maneuverability, it could dogfight with more powerful opponents like the British Supermarine Spitfire.