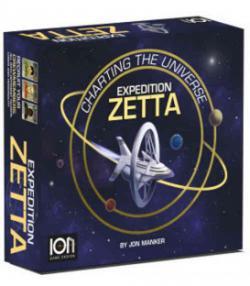 Have you ever looked up in the sky at all the stars, at the marvel of the Universe and felt a curious nerve inside wanting to travel to these stars, see the planets, and maybe find life? Expedition Zetta includes 3D-models of spaceships, gorgeous art, and a modular game system. In this game for 1-5 players, you and your fellow travellers each represent a country in a maiden voyage of the first starship to ever use a newly developed warp drive. The goal is to brave the unknown and collect discoveries in four different star systems. Though you may have to cooperate, one player will bring special fame and fortune to their home country. Will it be you?

In Expedition Zetta, you start the game by recruiting 1-4 crew members, then you will:

Every game plays differently! Each game includes four planetary systems. After warping together to a distant star, you travel with your crew individually between planets, searching for life and substances or trying to construct exo-products. If the life you find is intelligent, you may even interact with it. The discoveries are your main source of Fame.

The revolutionary Zetta Planetary System Generator, used in the advanced game, can generate as many different star systems in the game as there are in the known universe, each with its own unique characteristics and its own name. Thus, no two voyages to the stars will ever be the same! During the warp stage in the advanced game, you interact with the other players' crew members to gain advantages. Romance or intrigue may occur, with varying effects.

Apart from the gameplay experience, a journey with Expedition Zetta will give you knowledge about stars and planets, along with memories of when you for instance managed to extract gems from a gaseous giant in a triple star system, from when you found life in a lenticular galaxy or when you managed to produce time crystals near a super-hot supergiant O-star.

Expedition Zetta has a basic version that is great for the whole family.