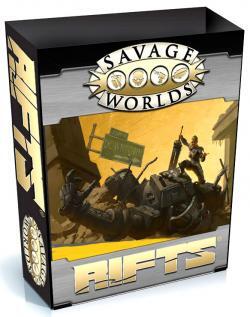 Three centuries after the Great Cataclysm nearly destroyed humanity, Earth is a post-apocalyptic wasteland. Fueled by the return of magic, holes torn in space and time act as arcane doorways to other realities. Whatever you imagine, whatever you fear, you’ll find it’s somewhere on this chaos-ravaged world.

Rifts Adventure Boxed Set allows you to explore whatever tales of adventure, horror, or action you want. Anything you can imagine can become reality for you and your players. Tell your story, and tell it big!

Revised and updated for the latest edition of the Savage Worlds rules, the Rifts® for Savage Worlds Adventure Boxed Set Includes: