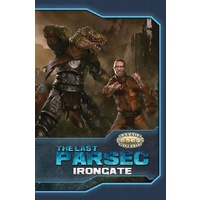 No guards. No rules.

Irongate is an intergalactic prison planet populated by a melting pot of the worst criminals the universe has to offer.

Left to their own devices the prisoners have created a culture of violence, greed, and profit. And there is profit to be made on Irongate. Built atop the ruins of a former mining colony, the prison operates its own rellium mine. So long as the prisoners produce ore, JumpCorp supplies the inhabitants with food, medicine, and goods they can’t get on the barren planet.

Irongate is both a post-apocalyptic wasteland and cyberpunk dystopia built on scavenged technology. It’s an urban nightmare of overcrowded streets where no one is safe and everything is for sale.

Criminals are here for life. Some see this as a death sentence, others as licensed anarchy.

And Stars help those poor souls sent here by mistake…

Irongate is a new sourcebook and Plot Point Campaign for The Last Parsec.