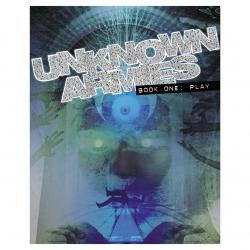 Unknown Armies RPG is an occult game about broken people conspiring to fix the world.

It's about keeping what you have from those who want it.

Unknown Armies presents magick as it might exist in a world informed by crime fiction and secret histories, as twisting wrinkles in reality created by greater and greater risk, sacrifice, and obsession. As the gamemaster, you lead the players in creating their characters and the world they exist in, then set up antagonists worthy of their attention. You are their guide into darkness and the light that shows them the way out.

It's about kicking them while they're down, then cheering when they get up.

Unknown Armies Book Two Run the book for gamemasters. It tells you how to: