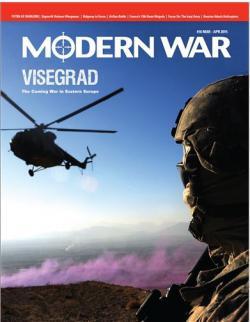 Dragon vs Bear: China Vs Russia is a wargame based on the premise that the People’s Republic of China and the Russian Federation go to war sometime in the 21st century.

The game is an update of SPI’s East is Red game, specifically showing the developments in warfare that have occurred in the intervening decades, and projected out to the near future. Both side’s armed forces are smaller than they were during the Cold War, but have access to modern high-tech weapons and tactics, termed in the game as Hyperwar.

Dragon vs. Bear: China vs Russia is operational level with two placers: one for China and one for Russia. It puts players in the position of having to use the full spectrum of military operations, including weapons of mass destruction. The game is played in scenarios, each postulating different reasons for the war, as well as different levels of mobilization. You win by defeating the enemy and gaining national objectives.

The game emphasizes land and air power. Naval warfare is factored out on the premise that the Chinese and Russian navies would cancel each other out for the period that the game scenarios covered. Conventional land and airpower are treated in a generally similar manner. This is in part because of the lack of sophisticated higher level airpower doctrines in the Chinese and Russian armed forces, but also because of the range and lethality of modern munitions: firepower is going to be the same whether delivered by a multiple rocket launcher system, an attack helicopter, or a jet bomber. The real difference is with the application of Hyperwar capabilities. Hyperwar is inherent in certain unit types, and can be assigned to others via Hyperwar strikes.