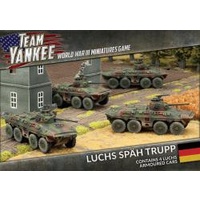 The Aufklärungs troops at the very front of the division’s vanguard are the Späh Truppen (reconnaissance patrols) equipped with the 8-wheeled Luchs armoured car.

The Luchs is fast on road, but still has excellent cross-country performance. It is a very quiet vehicle allowing its crew to advance on enemy positions undetected. If they are spotted, the Luchs can reverse at full-speed with the driver switching to a rear facing driving position. It is amphibious and is armed with a rapid-fire 20mm auto-cannon.